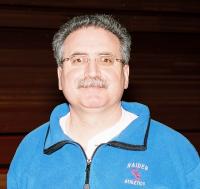 Coach Tacchi started coaching both Cross-Country and Track in 1981 at Princeton High School. He began coaching at Glenbard South during the 1990 Track season and became the Head Coach in the spring of 1991.  Over the years he has coached distance runners, sprinters, hurdlers, and long & triple jumpers.   Mr. Tacchi has also had the opportunity to coach football and basketball during his career.